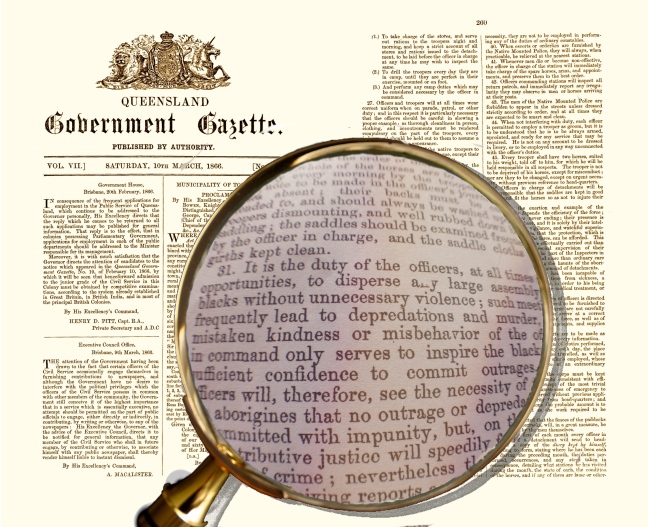 PLEASE NOTE: Aboriginal and Torres Strait Islander people should be aware that this document may contain images of deceased persons.

At the 150th anniversary of the gazettal of Regulations imposing a duty on armed officers to “disperse” any “large assembly of blacks without unnecessary violence”, how does the present day reality of Aboriginal people in Queensland continue to be shaped by the history of their relations with the Queensland colonial police force?

On Monday 29 August join us in the Premier’s Hall of Parliament House for an hour long discussion moderated by ABC Radio National’s Paul Barclay.

Megan is the Chair and UN expert member of the United Nations Permanent Forum on Indigenous Peoples and holds portfolios including Administration of Justice and Gender and Women and is the focal point for UN Women and UN AIDS.

Mark Finnane is ARC Laureate Fellow and Professor of History at Griffith University. He researches the history of criminal justice, policing, punishment, and criminal law and his books include Police and Government: Histories of Policing in Australia. Currently he directs the ARC-funded ‘Prosecution Project’, hosted at the Griffith Criminology Institute.

Sam Watson is a senior member of the Brisbane indigenous community. He has blood ties to the traditional owner nations of this area and has family ties to the Biri Gubba people, the Kalkadoon people and the Wik / Mapoon people. Since the 1960s he has been involved in setting up programmes and organisations to deliver essential survival services to Indigenous people across the state and nationally.

Caxton Legal Centre Incorporated acknowledges the Jagera (Yuggera) and Turrbul peoples who are the Traditional Custodians of this land on which we work. We recognise the ongoing connection to the land, waters and community of the Traditional Custodians. We also recognise, respect and celebrate the cultural distinctions of the First Nations peoples and value their rich and positive contribution to Queensland and to broader Australian society. With respect we strive to achieve justice and inclusion for Aboriginal and Torres Strait Islander people.